Feast of The Sacred Heart of Jesus

Born in France in 1647, Margaret Mary Alacoque was crippled by a disease at age 8.  After promising to give her life to Jesus’ service, she was miraculously healed through the intercession of the Blessed Virgin Mary. At 23, she entered the Visitation Order of Nuns.

Sister Margaret Mary fervently loved our Lord in the Blessed Sacrament—the consecrated Body of Christ from Holy Communion, which is kept in the tabernacles of Catholic churches. The world had grown cold and unresponsive to God and His offer of salvation through the grace His Son won for us all on the Cross. Over the course of a few years, Jesus appeared to Margaret, revealing to her His Sacred Heart. 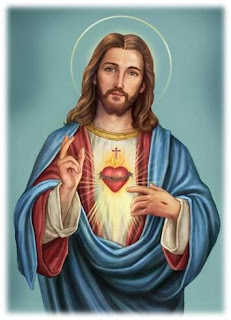 The flames coming forth from Jesus’ Heart remind us of His burning love for us and His desire that we love Him in return. The crown of thorns around His Heart reminds us of His sacrifice for us and His invitation that we offer our sufferings to Him, as Saint Paul teaches us: “Now I rejoice in my sufferings for your sake, and in my flesh I am filling up what is lacking in the afflictions of Christ on behalf of his body, which is the church” (Colossians 1:24).

Jesus made at least twelve promises to Sister Margaret Mary, revealing the abundance of His love and telling her how He would help those who honor His Sacred Heart. He said,

“Behold this Heart which has loved men and women so much, and yet they do not want to love Me in return.

Through you My divine Heart wishes to spread its love everywhere on earth.”

Jesus further promised, “I will bless every home in which an image of My Heart will be honored.”

Posted by Catholic Gifts and More at 12:15 PM No comments:

The Feast of the Annunciation of the Lord 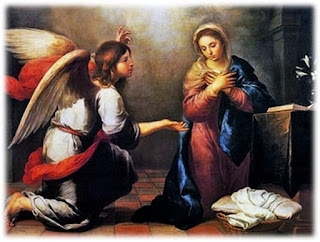 In the sixth month, the angel Gabriel was sent from God to a town of Galilee called Nazareth, to a virgin betrothed to a man named Joseph, of the house of David, and the virgin’s name was Mary. And coming to her, he said, “Hail, full of grace! The Lord is with you.” But she was greatly troubled at what was said and pondered what sort of greeting this might be. Then the angel said to her, “Do not be afraid, Mary, for you have found favor with God.

Behold, you will conceive in your womb and bear a son, and you shall name him Jesus. He will be great and will be called Son of the Most High, and the Lord God will give him the throne of David his father, and he will rule over the house of Jacob forever, and of his kingdom there will be no end.” But Mary said to the angel, “How can this be, since I have no relations with a man?” And the angel said to her in reply, “The holy Spirit will come upon you, and the power of the Most High will overshadow you. Therefore the child to be born will be called holy, the Son of God.

And behold, Elizabeth, your relative, has also conceived a son in her old age, and this is the sixth month for her who was called barren; for nothing will be impossible for God.” Mary said, “Behold, I am the handmaid of the Lord. May it be done to me according to your word.” Then the angel departed from her.

This feast is celebrated 9 months before Christmas, and is a Solemnity, a day of greatest importance in the Church.

Posted by Catholic Gifts and More at 11:38 AM No comments:

A Universal Prayer to Saint Joseph

Pope Francis has declared this the Year of Saint Joseph. As we celebrate his feast this Friday, March 19th,  let us pray together:

The Memorare to Saint Joseph

Remember, O most chaste spouse of the Virgin Mary, that never was it known, that anyone who implored your help or sought your intercession, was left unaided. Inspired by this confidence, we fly unto you, our spiritual father, and beg your protection. O Foster Father of the Redeemer, despise not our petitions, but in your mercy, hear and answer us. Amen.

May the Lord bring you ever closer to good Saint Joseph and our Blessed Mother Mary, now and forever. Amen.

Posted by Catholic Gifts and More at 3:20 PM 1 comment:

Workbook For Lectors, Gospel Readers and

Proclaimers of the World

Back in Stock - Order Today! 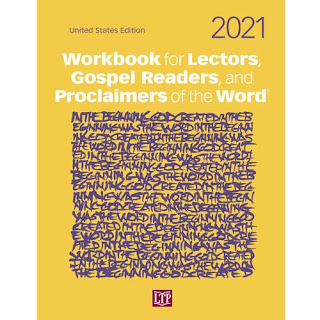 Posted by Catholic Gifts and More at 2:05 PM No comments:

Lent is Upon Us

During Lent, we are asked to devote ourselves to seeking the Lord in prayer and reading Scripture, to service by giving alms, and to practice self-control through fasting.

Many know of the tradition of abstaining from meat on Fridays during Lent, but we are also called to practice self-discipline and fast in other ways throughout the season. In addition, the giving of alms is one way to share God's gifts—not only through the distribution of money, but through the sharing of our time and talents.

As St. John Chrysostom reminds us: "Not to enable the poor to share in our goods is to steal from them and deprive them of life. The goods we possess are not ours, but theirs." (Catechism of the Catholic Church, no. 2446).

Posted by Catholic Gifts and More at 11:24 AM No comments: 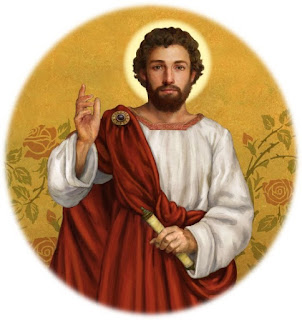 In 270 A.D. Emperor Claudius issued an edict forbidding marriage because he believed that married men made poor soldiers, not wanting to leave their families to go to battle. Bishop Valentine disagreed with the emperor and invited young lovers to come to him in secret to be married. When Claudius found that Valentine was performing marriages secretly, he was incensed. He had Valentine seized and brought before him. When Valentine refused to change his views and renounce Christianity, he was put in prison to await execution. The judge, whose name was Asterius, had a daughter who was blind. Valentine prayed for little girl, and God healed her. Before Valentine was executed, he wrote a letter to the girl, and signed it,  “From your Valentine”.  The next day, Valentine was clubbed, stoned, and then beheaded. He remained faithful to Jesus to the end.

Posted by Catholic Gifts and More at 1:57 PM No comments:

Happy Feast Day of Our Lady of Lourdes!

Bernadette Soubirous was born to a poor family in Lourdes, in southern France, on January 7, 1844. Her family lived in a small one-room cottage that had once been a jail. Bernadette was often sick and had a hard time at school. One day the 14-year old Bernadette went with some friends to gather firewood. Suddenly, in a cave beside a river, she saw a beautiful Lady wearing a blue and white dress above a rose bush. The Lady smiled at Bernadette and made the Sign of the Cross with a golden rosary. Bernadette knelt down and began to pray.

Crowds began to follow Bernadette to the cave as the Virgin Mary’s visits continued. Our Lady appeared a total of 18 times to Bernadette, revealing herself as the Immaculate Conception. (The Church teaches that Mary was conceived without sin by a singular grace of God so that Jesus could be born from an immaculate womb.) Our Lady asked Bernadette to dig at a spot near the grotto, and suddenly a fresh cool spring of healing waters began to flow. Mary asked Bernadette to have a chapel built nearby, so people could come there to wash and drink. The water from this spring continues to show remarkable healing power to this day, bringing medically documented healings to many people.

Bernadette joined the Sisters of Charity in Nevers, France, and died there from tuberculosis at the young age of 35. Lourdes is today the most famous modern shrine of Our Lady. Each year more than 5 million people come to the grotto of Massabielle to pray to God Our Father, to honor Mary, the Mother of Jesus, and to seek healing of spirit, soul, and body.

The response of so many has made Lourdes a Town of Friendship, a world center of pilgrimage, and a special place where God meets His people.

Pope Pius XI canonized Saint Bernadette in 1933, and to this day, her body remains entirely and miraculously incorrupt, at her convent in Nevers, France.

Posted by Catholic Gifts and More at 11:17 AM No comments:

Catholic Gifts and More
Catholic Gifts & More is a Catholic family owned and operated retail store that has been in business since 1948. With over 62 years in the Catholic market, we understand your needs and wants when it comes to religious and inspirational gifts. After many years in the traditional brick and mortar retail industry, we have decided to share our great prices and product selection with the rest of the world. With a large selection of Catholic books, Bibles, rosaries, crucifixes, and gifts for every Sacrament, we are pleased to offer something for nearly every occasion. Over the past 62 years we have remained consistent in striving to provide the highest quality products and service to our retail customers. As we venture into the online Catholic goods market, our promise remains the same. Your complete satisfaction is our goal and that is Our Pledge to You! ®